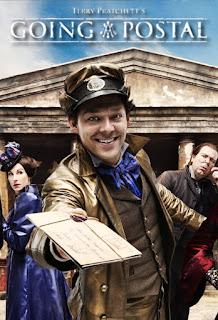 In 2010, Sky1 broadcast their third and last Terry Pratchett adaptation; Going Postal. It may not have starred the familiar faces casual fans have grown to love from the series such as Rincewind or Death, but it is perhaps the most entertaining of the three.

This is the story of Moist Von Lipwig (Richard Coyle, Prince of Persia: The Sands of Time), the greatest con artist the Disc has ever seen. That is until he is caught. Instead of dying at the hangman, Lord Vetinari, the Patrician (read governor played by Games of Thrones' Charles Dance) of Ank-Morpork, has decided that he should instead run the nigh on derelict system that is the Postal Service.

Why has this service fallen into dis-repair? Well, the single minded opportunist Reacher Gilt (David Suchet, Poirot) has revolutionised the industry by sending messages with an untrustworthy telegraph-like Clank system. As monopoly that he will stop at nothing to keep.

This is an underdog story with charming leads and an inventive storyline that looks into the perils of big business. Unlike the previous two adaptations, this one allows the narrative to unfold naturally without it seeming like a meticulous re-enactment of the source novel. The two-part structure of the feature length mini-series is a tough one to crack as each part needs to have its own arc as well as the series as a whole. The Hogfather and The Colour of Magic, while entertaining in their own right, do not satisfyingly achieve this. Perhaps the makers are trying to cram too much into the running time that they seem overwrought with exposition. There is a lot to explain in the idiosyncratic Discworld universe that are necessary for these two tales.

Going Postal, on the other hand, sticking to the seventh of the archetypical narratives: Rebirth. As such there is not so much need for a detailed explanation into the theories of belief, the politics of the guilds nor the intricacies of magic. Lipwig changes through the course of his journey from an uncaring con-artist to a valuable and popular member of the Ank-Morpork society. The funny thing here is that all the while Lipwig thinks he is still conning everyone. When he comes up with the idea of stamps for example, he does so not for entrepreneurial reasons, but in the belief that people will give him money for little more than paper.

If you had read the book, however, you may be disappointed. Like all adaptations things are sacrificed and changed to suit a visual medium. While the story is all here, several characters have been simplified to better suit the way the story is told. Gilt is played as little more than a panto villain and the snarly complexity of Adora Belle Dearheart (the love interest played by Claire Foy) has been reduced somewhat.

I love the book that this is based on, and I also love this adaptation (more so than most Pratchett fans it would seem, or at least the vocal minority). I understand the nature of adaptation to any medium and try my best to take each on their own merits and I believe that Going Postal wholeheartedly succeeds.

Want to see for yourself? You can purchase the DVD or Blu-Ray at Amazon by clicking here or on the picture at the top of the page. If you first want a little taster, see the teaser below.