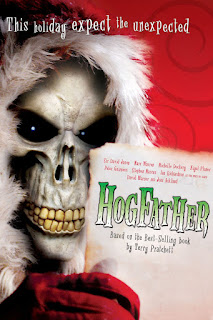 In the second of our week-long tribute to Terry Pratchett, we take a look at the first live-action adaptation of Pratchett's work. The Hogfather...

Airing in December 2006 on Sky1, The Hogfather was the big Christmas event that year. The story sees Death take over Hogswatch, Discworld's version of Christmas, after an assassination attempt on their Santa-with-a-snout Hogfather.

We begin with Susan, Death's granddaughter and the story's heroine, reading two children a fairy tale - Jack and the Beanstalk. The tale tells us how Jack got away with stealing from the giants leaving his giant sons orphans, but it's OK, it proves that "you can be excused for just about anything if you are a hero". Trademark Pratchett.

Susan is attempting to live a 'normal' life in Ankh-Morpork, the centre of the Disc, and has found a job as the Governess of these children. She also is a deft hand at dispatching boogeymen.

Meanwhile, the Assassin's Guild have been visited by a mysterious spirit asking for the death of the Hogfather. A man named Teatime (pronounced Tee-Ah-Tee-May) has been assigned the task, choosing to take control of the tooth-fairy's castle full of teeth to control the children's belief system (the Discworld has a complicated relationship between belief and reality, where these fantasy creatures would cease to exist if they are no longer believed in). It gets a bit overly complex, so much so that you may be completely lost if you are unfamiliar with Pratchett's work.

The nature of belief in this universe - and to a lesser extent in ours - is a running theme throughout the two-episode miniseries. You have to 'practice' believing in the little lies like the Hogfather so that you can believe in the big ones when you're old. Lies like justice, mercy, a universal order or a reason for being.

As death so eloquently puts it in his all-caps turn of phrase; "YOU NEED TO BELIEVE IN THINGS THAT AREN'T TRUE. HOW ELSE CAN THEY BECOME."

This adaptation is not without it's flaws. For starters, the running time is far too long. In order to flesh out its contracted three-hour running time, there is very little that has been removed from the book. As such the pace is very leisurely, often vying on boring. It would be a hard slog for many younger children to get through. An hour's worth of material could've easily been cut and we would've all been the better for it.

The other glaring issue, and one that is often debated amongst fans, is the portrayal or Mister Teatime, the villain of the piece. The mannerisms, the high-pitched voice, the manic laugh, pretty much everything has been a straight up imitation of Johnny Depp's version of Willy Wonka in Charlie and the Chocolate Factory.

This can be very distracting, often taking you out of the story, but not one without solid thought put behind it. Teatime is an obviously crazy character, but there are hints to his back story. It is revealed that as a child he had no friends while possibly setting cats on fire and definitely not receiving any Hogswatch presents. This would explain his arrested development and child-like arrogance as well as his penchant to call the hired thugs 'friends', even though he may not really know the definition. These are the same thoughts behind Depp's portrayal of the man-child shut-in Willy Wonka.

All in all, this is a solid adaptation of Terry Pratchett's The Hogfather and proof that his work is not un-adaptable (seriously, why hasn't there been a Discworld movie?). It's definitely get you in the spirit of Hogswatch, no matter what time of the year you watch it.

The film is available to buy now at Amazon. Click here or on the image up top to head over and buy it. You can see the trailer for its DVD release below.