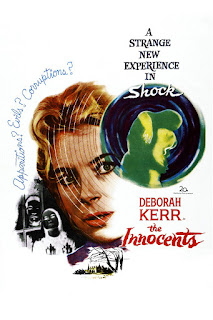 In 1961, director Jack Clayton ushered one of literature's finest ghost stories to the silver screen. It has often been eclipsed by the similar black and white spook-fest The Haunting released a few years later. Today, The Collection Chamber will release the greatest telling of Henry James' The Turn of the Screw - The Innocents...

Henry James is probably best known for authoring character dramas such as Portrait of a Lady and The Wings of the Dove, with this being his only foray into the Gothic genre. It tells the tale of a newly appointed governess tasked with upbringing two orphan siblings at the behest of their wealthy Uncle. Things are not all they seem as strange apparitions plague the governess, slowly descending her to madness.

The plot has transitioned well under the guidance of Jack Clayton (The Great Gatsby) and screenwriter Truman Capote (Breakfast at Tiffany's), but it is the deeper meanings that can be read that transcends it to greatness - one that far surpasses such well-loved ghostly classics as The Haunting and The Exorcist in my opinion.

The film begins with a minute of in blackness, an eerie children's song playing in the background. Then, while the credits are running, we see a pair of hands, palms open and the sound of weeping. This image morphs into that of a woman praying. This tells us a lot about the psyche of our governess, Miss Giddens; fragile, emotional, unstable. "All I wanted to do is save the children, not destroy them. More than anything I love the children, more than anything. They need affection, love, someone who'll belong to them. They do belong."

Cut to the first question of her interview for the role of the governess; "Do you have an imagination?". A telling beginning and one that foreshadows the events that are to come.

The first of the children we meet at the sprawling country mansion that is their home is Flora, an enthusiastic child who seems to be interested in everything, including the reptiles that roam the grounds. He brother Miles is away at school but Flora insists that he's coming home soon. A wish that turns out to be very prophetic. Miles has been expelled.

This is where the troubles truly begins. The children start saying strange things, visions of a strange figure appears on the rooftops and behind dark windows and noises disrupt her during the night. This leads a frightened Miss Giddens to search the darkened corridors with nothing but a candelabra. The house becomes enshrouded in shadows giving an otherworldly aura, reminiscent of fantasy accompanying Belle's first foray into the Beast's castle in Cocteau's La Belle et la Bete.

Are the strange goings on the result of a ghost haunting the mansion, affecting the children, or are they all in the imagination that Miss Giddens had insisted she had. It's certainly subtle enough to be read either way, but its the partially explained back story that truly intrigues and ascends the film into greatness.

It is this back story that asks us the question of who are the innocents of the title? Is it the ghosts of the piece, a former governess and grounds keeper who died mysteriously on the premises? Is it the children, whose back story could potentially include sexual abuse? Or is it Miss Giddens herself, an implied virgin whose sexual repression and mental illness may have projected the entire fantasy on to the viewer?

It is the rich story and the precise way in which it is told that lead the seminal French critic François Truffaut to say that this film is "the best British film since Hitchcock left for Hollywood". With such a pedigree, it is a movie that doesn't deserve to be anywhere near the vaults of the Collection Chamber and therefore I grant The Innocents the freedom it so greatly deserves.


If you'd like to see the movie, you can buy by click on the image at the top of the page or clicking here. Watch the trailer below.